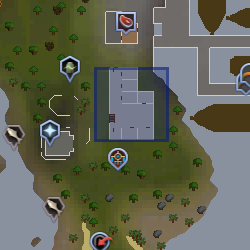 If players logged out whilst Rick Turpentine was their random event, he would exclaim What a dismal little spot this is and disappear. Rick was one of the random events that was retired on 25 February 2009, but he can still be seen in the Port Sarim Jail along with Cap'n Hand. If the player kills the mugger in his cell, he will cheer and say Hahaha! Thanks!

He is also featured in Court Cases, where he was accused of robbing Richard Maney. Players may choose to prosecute or defend him.

During the Port Sarim Invasion which began on 11 July 2016, Rick Turpentine was abducted from the jail by Jed the Slaver and The Skulls, along with Cap'n Hand and several others.

Rick thanking a player for killing the mugger.
Click an image to enlarge

Retrieved from "https://runescape.fandom.com/wiki/Rick_Turpentine?oldid=24562132"
Community content is available under CC-BY-SA unless otherwise noted.