Your item will be destroyed permanently and it may not be reclaimable.

A ring with rare powers.

The Ring of rares was an item obtained during the 2018 April Fools' event. Partyhats in all six colours would spawn continuously in certain locations and if a player tried to pick one up they would be met with the message, and would be given the ring:

You cast the partyhat aside and pick up a precious ring you find underneath it instead.

Players may not have more than one ring at any time. Attempting to pick one up with another in their inventory would give the message:

Losing a ring made it possible to find another by picking up a partyhat again.

The ring would allow the player to turn into various old holiday items by attempting to wear it. These include:

Attempting to wear a ring of rares after 00:00 UTC 2 April 2018 produced the following message:

The ring slips from your grasp and rolls away, never to be seen again.

All ring of rares and ring of randoms were then removed from the bank and inventory. 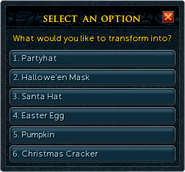 The interface for the ring of rares.
Click an image to enlarge

Mod Osborne is intending to bring back the Ring of rares and Ring of random annually. [1]

Retrieved from "https://runescape.fandom.com/wiki/Ring_of_rares?oldid=24561483"
Community content is available under CC-BY-SA unless otherwise noted.