Rivers are geographical features in RuneScape that flow water from one place to another. They serve many purposes, including transportation via canoes, and a variety of fly fishing spots. Rivers are often the borders between different regions of Gielinor, and play vital roles in some quests. There are sometimes agility shortcuts like stepping stones and log balances that can be used to cross the rivers.

A river in Isafdar runs just south of Prifddinas. It begins in the mountains of Arandar and flows west toward the Western sea. It can be traversed in four locations, three of which are log balance agility shortcuts, and one of which is a bridge. The river meanders through the Elf camp, and has several fishing spots containing sharks.

A river forms the northern boundary of Kandarin and separates the Sinclair Mansion from the Fremennik Province, connecting a large unnamed lake to its east to the open water in the west. Along with a second unnamed river branching to its south, it forms two peninsulas: one with the Sinclair Mansion, and another near the Council workman. The river can be crossed by a bridge near the workman, and a second crossing exists in the form of a log balance agility shortcut north of the Sinclair Mansion.

A river begins in a small lake near the southwest corner of the Tree Gnome Stronghold and flows north past Eagles' Peak. It has several waterfalls and flows past Kathy Corkat and her boat, which can be used to travel north through and past the river's mouth to the Piscatoris Fishing Colony. There is a single bridge crossing the river, inside the Tree Gnome Stronghold, which provides the only access to the south-easternmost part of the Stronghold.

A river flows westward through the middle of Shilo Village. It begins in the southeastern region of Karamja in a small lake that also flows out into the unnamed eastern Karamja river. It can be crossed by one bridge in Shilo Village and one bridge to the west of the city walls. There is another crossing inside the city in the form of a stepping stone shortcut, requiring level 74 Agility. Crossing the river using this shortcut is a requirement for the Elite set of Karamja Tasks. Inside Shilo Village there is also a house that crosses over the river, which must be entered on the south side and is home to the slayer master Duradel on the north side of the river. 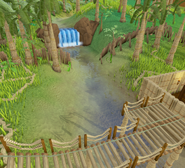 A second river flows north, separating eastern Karamja from the main island. It begins in the same small lake in southeastern Karamja, and flows north over a waterfall before it empties into the inlet south of Musa Point. It can be crossed about halfway along its path using a log balance.

A small underground river in the Kharazi Dungeon provides pure water to the savages in the Kharazi Jungle. It has several boulders that must be moved during the Legends' Quest in order to create a spring of sacred water. 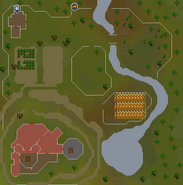 In Taverley, a river forms from the lake near the centre of the city and flows south into the open water. A waterwheel makes use of the flowing river and can be used to grind flour. One bridge crosses the river near its southern point.

Taverley river with watermill
Click an image to enlarge

A short river going through Entrana sits in the centre of the island, connecting to the open water on the eastern side. It has several bait and fly fishing spots to catch trout, salmon, and pike.

A river through Ape Atoll provides obstacles for the Ape Atoll Agility Course. The river begins at the highest peak of Ape Atoll, and has many rapids which are traversed several times through the agility course. The river flows into a lake with a fishing spot before emptying into open water to the east.

A river in the Enchanted Valley forms a stunning waterfall before flowing southeast out of the area. The side of the river is covered in thick reeds. The river is home to river trolls, which can be fought by attempting to fish at the apparent fishing spots. 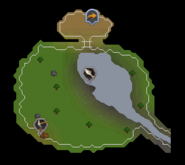 Land of Holly and Hawthorn

River flowing from Hawthorn to Holly
Click an image to enlarge

Retrieved from "https://runescape.fandom.com/wiki/River?oldid=20923581"
Community content is available under CC-BY-SA unless otherwise noted.