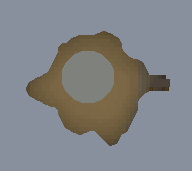 The Rock Island Prison (also known as The Rock) is a prison that players navigate during the course of the Rocking Out quest, and may optionally revisit after the quest as an alternate way to train Thieving. The prison is located off the eastern shores of Karamja. It is recommended that players have at least level 35 Attack and Strength before visiting this area. The area was released on 11 June 2008.

During the quest, players are sent to the Rock Island Prison by the Customs Sergeant in Rimmington. After the quest, players may again talk to the sergeant, who will be surprised that the player managed to escape and send him back. However, before travelling there players have to deposit all items including worn equipment and inventory items.

Once they escape their cell, they will be able to kill the Customs Officers (without any weapons). By killing them, they will obtain the Customs uniform (customs hat, customs shirt, and customs trousers), and a mithril scimitar. This uniform is required in order to proceed further into the prison, and to enter the Evidence lockers room located at the second floor.

The pier is located at the eastern part of the island. Players can dive off the pier, losing their jail clothes and their full customs outfit (including the scimitar) in the process. After the dive, players will swim all the way to Karamja and arrive near the Shipyard.

The main entrance to the prison is locked and there is a path beyond this door, but it cannot be accessed by players. In addition to the jail cells, there is a spiral staircase for accessing the upper levels.

The first floor contains the bunkers for the guards and a lounge. Several officers guard this floor.

There is an Evidence locker room in the second floor that is guarded by a Locker guard. This room contains the Customs evidence files, which can be looted from the cabinets located within at level 63 Thieving. To enter the room, the player must be wearing the Customs uniform, or he or she will not be allowed to enter. When the evidence files are being looted, there is a chance that the Customs officers will attack the player, as this room is heavily guarded. Some of the loot includes pirate clothing, 300 coins, mithril, gold, and iron bars, uncut gems ranging from sapphire to diamond, sharks, and bronze, iron, steel, and rune scimitars.

The prison can be escaped from by one of three ways:

Although a message indicates that all items the player was wearing or wielding are lost, this is not the case. The Customs uniform and mithril scimitar are always lost regardless of what is being worn or wielded, but all other items are retained. Therefore, a player wanting to maximise their loot should wear an eyepatch, stripy pirate shirt, and pirate boots and wield a looted scimitar; dropping the Customs uniform and Mithril scimitar before teleporting.

Retrieved from "https://runescape.fandom.com/wiki/Rock_Island_Prison?oldid=22634882"
Community content is available under CC-BY-SA unless otherwise noted.