Start a Wiki
This article is about NPC encountered during a quest. For other uses of Rogue, see Rogue (disambiguation).

A dishonest and knavish person. 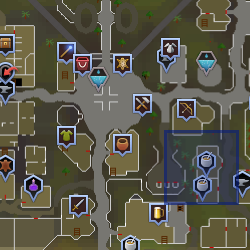 The Rogue is a non-player character that players first encounter by completing the quest Summer's End. To find him, players must enter the Spirit Realm using Jennica's ring via the portal located in the Rogues' Castle courtyard and close the prison doors there; this will open them in the "real" world, allowing the players to talk to him.

After a brief dialogue, the rogue will sneak back to Varrock, where players can use un-enchanted jewellery on him in order to sell to him.

The rogue was once a part of the group of rogues in Rogue's Castle. However, the other rogues discovered the gold that they had stolen was missing. This rogue argued that he did not steal it; however, the others didn't believe him and locked him in a jail cell. Fortunately for the rogue, an adventurer (the player) decided to break him out. However, the jail cell doors were locked and the only way to unlock them is to close them in the Spirit Realm - the exact opposite happens in the real world. After unlocking the doors, the rogue thanks the player for helping him break out and escapes to Varrock.

Freeing the Rogue is a requirement for the following:

Retrieved from "https://runescape.fandom.com/wiki/Rogue_(Varrock)?oldid=24563657"
Community content is available under CC-BY-SA unless otherwise noted.