Start a Wiki
CSOS
This article is about the wilderness fortress. For the location in Burthorpe, see Rogues' Den.
[view] • [talk]

The Rogues' Castle is a fortress located in the deep Wilderness, specifically in levels 50-54. It is inhabited by Rogues, Rogue Enforcers, and Rogue Captains who can be attacked and auto-pickpocketed. An aggressive boss monster, the Chaos Elemental, can be found lurking around or inside the castle. The song Regal is unlocked near the castle. The main door remains locked at all times, and one of the side doors must be used to enter the castle.

The Chaos Elemental patrols the west and south perimeter of the Rogue's Castle and can attack players "offscreen", making the area quite dangerous to reach. However, there is a Teleportation obelisk in the area, which makes for a fast transport to the castle area, or a quick escape for players being hunted by the Elemental. The Elemental does not enter far into the courtyard of the castle but can attack quite far from just inside the southern gate. Prior to the Elemental's release the castle was actually one of the safest areas in the Wilderness.

Players come here mainly to kill the Chaos elemental. Some players come here to pickpocket the Rogues or crack safes for the Thieving experience (although the risk of death being high makes players being sighted rare). Players also come here to rescue the Rogue (Varrock) from the castle. The castle is used as part of The Curse of Zaros and Lost Her Marbles miniquests. Furthermore, it is the location of a Treasure Trail Coordinates clue. Other than that, it has no quest purposes.

Just north of the Rogues' Castle, there exists a deposit of columnar basalt along the shore, and are only found in two locations in the game, the other being near the Lighthouse. 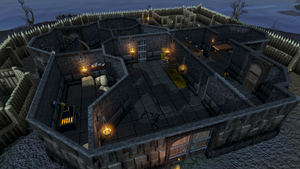 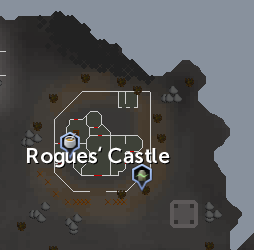 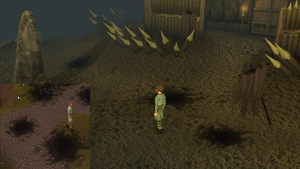 Retrieved from "https://runescape.fandom.com/wiki/Rogues%27_Castle?oldid=24309242"
Community content is available under CC-BY-SA unless otherwise noted.