A seller of tasty choc ices. 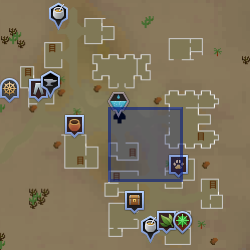 Rokuh is a trader in Nardah who runs Rok's Chocs Box merchant stall. He can be found in the town square at his stall, located just south-east of the fountain. He is generally well liked by his fellow citizens, as he sold (and still sells) choc-ice at an affordable price to the citizens of Nardah when a curse cut the town's water supply prior to Spirits of the Elid, which resulted in demand for the choc-ices increasing significantly. He says he purchased a box of magical non-melting ice (possibly an ice cooler) from a visitor, which provides the ice for the choc-ices and preserves the frozen food in the desert.

From his merchant stall, he sells chocolate bars and choc-ice. There is no minimap icon for the store.

Rokuh is also playing a role in the Do No Evil quest, players need to speak to Rokuh and buy some chimp ice for 1,000 coins, who then face the difficult task of transporting them to Ape Atoll.

He is also playing a role in the Crocodile Tears quest, players need to speak to Rokuh and buy some croc ice for 1,000 coins, who then face the difficult task of transporting them to Crondis without using magic while consuming them occasionally during the trip.

He is an answer to the crossword of the Cryptic Clue Fest III, as "A stone who sells cold chocolate."

Retrieved from "https://runescape.fandom.com/wiki/Rokuh?oldid=24562676"
Community content is available under CC-BY-SA unless otherwise noted.