Entrance to Dwarven Mine at Ice Mountain

He looks a little absent-minded. 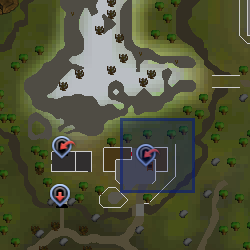 Rolad is a dwarf living in the dwarven camp found on Ice Mountain. He plays a role in two quests. In the quest Between a Rock..., he helps the player construct a book of Dwarven lore. He also plays a role in Catapult Construction, where the player has to look for the Metal catapult parts.

Rolad is a scholar, and his name is almost the same as Roald, the name of the line of kings of Misthalin.

He also apparently has a Mining level lower than 60, as when spoken to during the Between a Rock... quest, he says he can't enter the Mining Guild.

Retrieved from "https://runescape.fandom.com/wiki/Rolad?oldid=24563281"
Community content is available under CC-BY-SA unless otherwise noted.