Romeo & Juliet, a quest based on the Shakespearean play of the same title, was one of the six quests that were available on the initial launch of RuneScape. It has been removed from the game and replaced with Gunnar's Ground[1]. Jagex has received a fair share of criticism from players who considered Romeo & Juliet to be an integral part of the game's history.

Romeo can be found in or near Varrock square. Speak with him to start the quest. He will ask you to go talk to Juliet.

Talk to Juliet, who is located in the first floor of the house (usually standing on the balcony or sometimes in her bedroom) directly out of Varrock west gate, just west of the bank. She will give you a letter for Romeo.

Romeo reads the letter and doesn't know what to do. Now go speak to Father Lawrence, located in the Varrock chapel just north of Varrock's east bank. After a bit of an argument, he mentions a cadava potion, and asks you to speak to the Apothecary. He is in a little house with the symbol of a purple potion just north-west of Varrock south gate, around the back of the Varrock Sword Shop.

Speak to the Apothecary and he will tell you he needs cadava berries. They can be found near the East Varrock Mine, you will need to pick one from the bushes containing the pink berries. The red berries are redberries, and cannot be used for the quest. Alternately, one could grow a cadava bush and pick berries off it, or just purchase them on the Grand Exchange. After getting them, return to the Apothecary and he will make the potion. Drinking this potion will result in temporarily knocking yourself out.

Note that it is possible to make multiple potions, but other than a funny little scene, it is almost impossible to use and the only way to use it is in the Apothecary's house.

Now, head back to Juliet and give her the potion. You will now see a cutscene of her "dying", though she really falls into a coma. Go back to Romeo and tell him that he must rescue Juliet from the crypt. Apparently, he needs someone to accompany him.

You will now see another cut scene of you entering with Romeo. When he sees Juliet's cousin, Phillipa, he forgets all about Juliet and falls in love with her. You have now completed the quest! 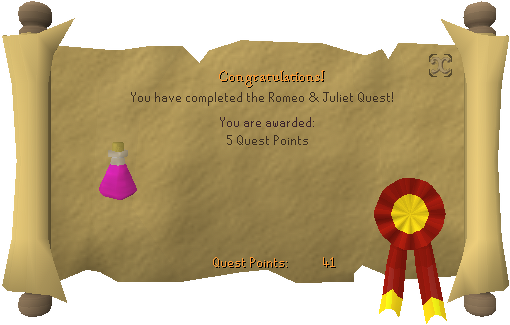 Unlisted music track that plays in the Varrock crypts