He rules the er, roost. 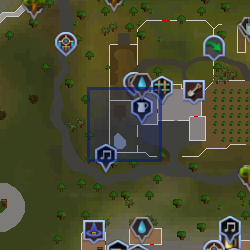 Nigel is a small rooster who lives on Falador Farm. Unlike other roosters, he cannot be attacked, and can often be found sitting perched atop a crate. Although he is rather small in comparison to other chickens due to an illness,[1] this seems not to hinder him, as he apparently rules over the other chickens on his farm.

The Evil Chicken knows of Nigel, claiming that he is an imbecile and no friend of his. They have played cards together in the past, and according to the Evil Chicken, Nigel often cheats during these games.[2]

Retrieved from "https://runescape.fandom.com/wiki/Rooster_(NPC)?oldid=24564900"
Community content is available under CC-BY-SA unless otherwise noted.