The Royal Army of Ardougne is the primary military force of both West and East Ardougne, the joint capital cities of Kandarin. The Army possesses a strong presence within the city (particularly in the East City), but is referred to by name rarely; the Recruiter in West Ardougne makes the most obvious reference.

In the prosperous side of the River Dougne, East Ardougne's army is greatly varied and effective, consisting of the royal Knights of Ardougne, the Holy Order of Paladins, an organisation of holy warriors of Saradomin, a handful of elite mercenary "Heroes", as well as a strong Ardougne Police Force which keeps order in the city, particularly around the market, which is known for its high levels of crime. They also work closely navally with the Customs and Excise Office, particularly in controlling piracy in the bordering Southern Sea. 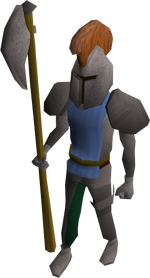 Militant action in West Ardougne is not as varied as those in the east, and the majority of the Royal forces serve East Ardougne and King Lathas, with few still working to protect the plague-stricken West. However, the personal guard of King Tyras, named Tyras guards after him, are a sect of elite and highly-trained soldiers and are the most prominent force to still serve West Ardougne, greatly outmatching the strongest soldiers of East Ardougne in strength and mobility, although since King Tyras's final foray into Tirannwn and the dangerous lands to the West, most of the Tyras Guard are now stranded beyond the Arandar Mountain Range with their King and their General, though a Recruiter has been left behind in the city to attempt to find suitable candidates to join the Army and replenish the losses sustained by Tyras.

By the end of Plague's End, the mourners present in West Ardougne will be replaced by the Knights of Ardougne. These knights have different drops than their counterparts in the East and cannot be pickpocketed.

Retrieved from "https://runescape.fandom.com/wiki/Royal_Army_of_Ardougne?oldid=17836044"
Community content is available under CC-BY-SA unless otherwise noted.