Enchanted ruby tipped bakriminel bolts. Item bonus: Blood Forfeit - 5% chance to hit your opponent for 20% of their lifepoints and hit yourself for 10% of your lifepoints.
Loading... 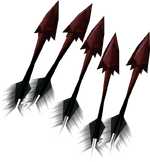 Enchanted ruby bakriminel bolts have a 5% chance of triggering the Blood Forfeit effect, which hits the target for 20% of their remaining life points, while dealing the player 10% of their own life points as recoil. In player killing situations the damage is capped at 3,000, and against monsters at 10,000 for regular hits, and 12,000 for critical hits. For monsters with over 1,000,000 life points remaining the chance of triggering is lowered by 1% for every 1,000,000, capping at 1% for monsters with over 4,000,000 life points remaining.

The damage of the effect can be further increased by Prayers, Void Knight equipment (but not normal equipment damage bonuses), having boosted levels and Needle Strike's buff.

Onslaught can trigger the effect, but only Prayer and boosted levels will increase that damage. Onslaught's own self-damage would be taken as normal for that hit. Ruby bolts (e)'s self-damage appears to be 10% of the life points before the previous self-damage hit is taken into account (e.g. if the player had 6000 life points, Onslaught deals 1000 self-damage, and then the next hit triggers ruby bolts (e), they would take 600 additional damage instead of 500).

Sacrifice can trigger the effect and will heal according to the damage dealt by the effect.

Retrieved from "https://runescape.fandom.com/wiki/Ruby_bakriminel_bolts_(e)?oldid=24561084"
Community content is available under CC-BY-SA unless otherwise noted.