According to Wikipedia, a troll is "someone who posts controversial and usually irrelevant or off-topic messages in an online community, [...] with the intention of baiting other users into an emotional response or to generally disrupt normal on-topic discussion." Like many other communities, the RuneScape Wiki has its fair share of trolls. In fact, most vandals could be considered trolls, as their general goal is often to disrupt the wiki. The majority of trolls we come across here are only around once or twice, though there are a few long-term abusers. 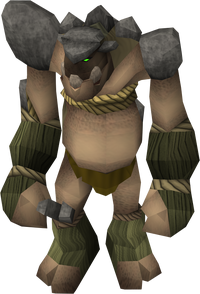 All too often, we as a community pay too much attention to these trolls, especially the few repeat offenders that return time and time again. Their stories are retold on project pages, the forums, and IRC, and they eventually become part of the RuneScape Wiki culture, whether we intend it or not. What needs to be realised is that trolls only stay if they are recognised by us. If we pay attention to them, make comments, and talk about them amongst ourselves, then we are recognising their existence and impact, which makes them come back for more. Even if they won't admit it, there is nothing they can do that will seriously disrupt the community. There is no need to pay attention to trolls, especially given that it only encourages them to make more attempts at disruption.

Arguing with trolls is equally pointless and counter-productive. There is nothing to "win" by arguing with them; it only encourages them to come back to continue the argument. Again, trolls should simply be dealt with and left alone. This includes "arguments" that take place partially in block reasons – they can sometimes trigger a broader argument on the troll's user talk page. A good block reason should simply state the reason they are banned, preferably more specific than "trolling" (for example, "vandalism" or "ban evasion"). In particular, the block reason should not contain the name of the troll, as this gives him or her more recognition, and can occasionally start arguments by itself.