Two events will be held during the Wikifest, first a large drop party containing 200,000,000 in dropped prizes will occur followed by the playing of Soul Wars.

The drop party will be the first event. Roughly 200 million coins worth of items shall be dropped using the Falador Party Room.

The drop will roughly consist of these items. There might be some differences between the final drop and this list, for various reasons.

Feel free to bring your own items for the drop as well!

Soul Wars will occur after the drop party has taken place. The event will move from the party room to the Soul Wars lobby. All players should enter using the green portal to keep games fair.

Please read this page first if you have never played Soul Wars before.

When you arrive at the Soul Wars lobby, you will also be able to ask Nomad/Zimberfizz for a very brief tutorial of the game. 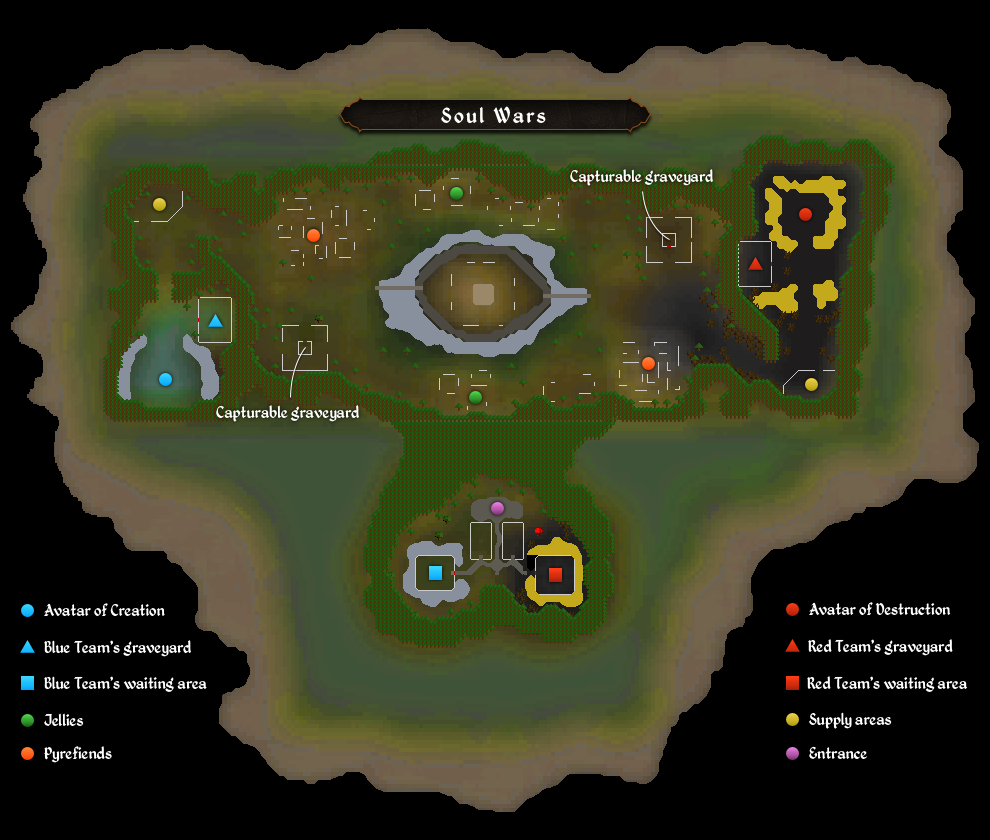 High combat level: Focus on killing players in the important areas (Graveyard and obelisk) and, when you are able to, the opposite team's avatar. If your team begins to lose the lead you should begin collecting soul fragments and weakening the opposing team's avatar.

Low combat level, 30+ slayer: Focus on killing the Pyrefiends and Jellies that surround the main part of the map. Collect the soul fragments that they drop and deposit them at the Soul obelisk in the center of the map. (Note: This can only be done if your team has control of the obelisk)

Low combat level, low slayer level: Focus on supporting your teammates by using Bandages on them (heals them) or by burying bones in a graveyard controlled by your team (strengthens your avatar).

To help players keep track of all of the useful information, there is a display in the top-right corner of the screen.

For a detailed list of the rewards, see here.

Reward points or "Zeal" can be spent on experience, summoning charms, pets or on a "gamble" option which randomly selects a prize consisting of items, normally of a high value.

Questions? Comments? Ask away!
Retrieved from "https://runescape.fandom.com/wiki/RuneScape:Events_Team/Spring_Wikifest_(29_March_2014)?oldid=10348137"
Community content is available under CC-BY-SA unless otherwise noted.