RuneScape: Idle Adventures was a spin-off of RuneScape announced on 17 February 2016, developed by Hyper Hippo and Jagex.[1] It featured The Needle, an Elder Artefact.[2] Alpha versions of the Android and iOS versions were initially available to attendees of RuneFest 2016.

The game is based in the RuneScape universe, following the general role-playing game format of levelling up and acquiring various items. Players will make small decisions on what to do and can then leave the game alone to do other things while their character will skill or train in real time without supervision.

The player takes the role of a godlike blue-skinned being that they can name and choose the gender of - by default, they are female, named Sally. Sally has some ability to shapeshift, notably increasing or decreasing in size. In most in-game art, Sally is depicted as being slightly larger than a human (similar in stature to the mahjarrat), but other artwork depicts her as being able to grow larger than trees and ships. Sally possesses The Needle, an Elder Artefact which is used to prestige and gather the threads of time. She can also wear equipment awarded from quests or found in a dungeon to increase her effectiveness at skills or combat.

The player works through various towns, from Lumbridge to Falador, Varrock and more. Within each town, up to 9 skilling spots are available to earn the two main types of currency: blue and red anima. Red anima is earned from working on combat skills, and blue from other skills - several skills are classed as combat skills in Idle Adventures that are not in RuneScape itself. The player can pay using the relevant anima to hire workers for these spots, which increases the output of the skilling spot - but additional workers are increasingly expensive. The spot that Sally is working on usually has increased speed and output.

Sally has several activatable abilities with long cooldowns to temporarily increase her effectiveness, such as temporarily doubling the speed of the plot she is working on, or working on every plot simultaneously.

Sally trains her skills as she uses them, much like RuneScape itself. Additionally, the player can spend anima on levelling up Sally's skills instantly. Reaching milestones in Sally's skills provides benefits to the associated skilling plots, like increased speed and output, or decreased worker cost. Combat skills are also made more effective in dungeons.

Various dungeons are available throughout the game, starting with the Lumbridge Catacombs. The player can enter at any time and fight their way to the end, or until Sally dies. Inside a dungeon, the player picks three combat skills to use (which can be swapped at any time, but cooldowns are reset when they are). The skills each have different effects and cooldowns - for example, Ranged is a fast cooldown, low damage attack, Magic is a long cooldown, high damage attack, Attack is in between each; Prayer heals Sally, Agility increases the damage of the next Ranged attack, and so on. The combat triangle is also in effect - using the wrong attack type does half damage, and the correct attack type does double damage.

Sally has additional activatable abilities that can be used with a longer cooldown - temporarily doubling damage, reducing cooldown on all combat skills, etc.

Dungeons have a number of waves, and the player can leave after any one of the waves (but not during). Each monster kill awards some red anima and may award equipment, but death reduces the anima and loses all collected equipment. When the dungeon is completed, the player is returned to town.

Various non-player characters, including Fred the Farmer, Duke Horacio, Bob the cat, and even Saradomin, give Sally quests to complete. The tasks include hiring a specific number of workers on a specific plot, completing a specific plot's action a number of times, or kill a number of specific monsters in a dungeon. Sally is awarded with anima, and sometimes with equipment.

After reaching a specific point, the player is able to prestige. Prestiging resets all the quests, anima, workers, and towns back to as they were at the start of the game, but Sally keeps her skill levels (and some quests that transcend the reset action), and earns some threads. Threads increase the rate that anima is earned, allowing faster progress. Additionally, after the first reset, Sally is able to 'quick-complete' quests if she has the required skill levels, skipping the required tasks to allow faster progress. Threads are earned after collecting various amounts of anima, which increase the more threads have been earned in total.

This forms the wider gameplay loop - earn anima, buy workers to earn anima faster, complete quests, until you have enough anima to earn some threads, then repeat, going faster and further than the previous time.

A microtransaction shop was available to purchase boosts, which increased the amount of anima earned permanently.

Concept art of the main character

Artwork of the main character sitting near some Gnomes

Artwork of the main character fighting a giant green Karamthulhu 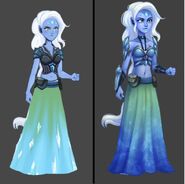 A before and after picture showing the progression of the character art. 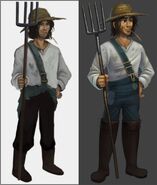 Another before and after picture, this time showing the NPC Fred the Farmer