Rune Mysteries is mostly important for unlocking the ability to mine essence for the Runecrafting skill. With proper teleportation methods, this quest is very easy and short, but for many new non-members without teleports, this quest can be very "annoying", seeing that you run back and forth a lot.

Recent research at the Wizards' Tower has found a way to create runes for the first time in centuries. Assist the head wizard, Sedridor, in his research and he may teach you these secrets too...

To start this quest, talk to Duke Horacio, who is on the first floor of Lumbridge Castle, and ask him for a quest. He will give you a strange talisman, and asks you to take it to the head wizard of the Wizards' Tower for identification. Exit the castle, and go to the Wizards' Tower, which is south-west of the Castle and south of Draynor Village, and go meet the head wizard.

Look for the wizard Sedridor in the basement and then talk to him. He will confirm to be the head wizard and take the talisman given by Duke Horacio before giving you a research package, which you have to deliver to rune expert Aubury in Varrock. Aubury lives south of Varrock's east bank where he has his own

Go to Aubury's Rune Shop and talk to Aubury. He'll want you to deliver some notes back to Wizard Sedridor and also ask you if you would like to be teleported directly to the Wizards' Tower. This teleport will bring you outside the Wizards' Tower. (He sometimes will not ask)

After giving the notes to Wizard Sedridor, he will give you an air talisman and he'll explain the 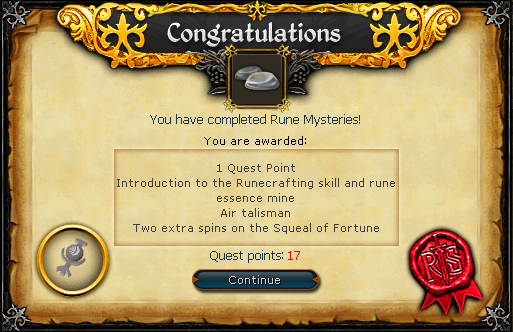