A rune kiteshield in the colours of Armadyl.
Loading... 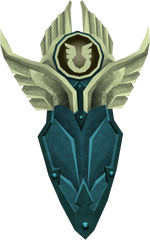 This kiteshield is a constituent of the Armadyl armour set (lg)/(sk) which consists of the following items: rune full helm (Armadyl), rune platebody (Armadyl), rune platelegs (Armadyl) or rune plateskirt (Armadyl), and rune kiteshield (Armadyl)—all of which are decorative versions of their respective rune armour counterparts. Players wielding any piece featured in this set of armour will cause followers of Armadyl to become unaggressive upon entering the God Wars Dungeon.

Retrieved from "https://runescape.fandom.com/wiki/Rune_kiteshield_(Armadyl)?oldid=24544672"
Community content is available under CC-BY-SA unless otherwise noted.