View source
watch 02:34
Fire Emblem Warriors: Three Hopes - The Loop
Do you like this video?
Play Sound
"RoB" redirects here. For the finale in the Myreque quest series, see River of Blood.
Not to be confused with Blood Rush.
[view] • [talk]

Rush of Blood is a weekly Slayer-themed combat Distraction and Diversion that can be played in Prifddinas, requiring at least level 85 Slayer and completion of Plague's End. It is run by Morvran Iorwerth, slayer master and former warband leader, and takes place in his dungeon underneath the Iorwerth Clan district. In the D&D, waves of different monsters, drawn from Morvran's assignment list, must be fought and one is given ten minutes to do so.

The activity can be played once a week for a reward book, Slayer experience and monster drops and any number of times for practice for monster drops only. After talking to Morvran to use his dungeon, select either Reward Run or Trial Run. There is a reward chest behind a locked gate. The gate will not open until ten minutes have passed, and will contain a small amount of drops from the monsters defeated, plus a reward book when on a reward run, based on how far the player went.

The timer does not begin until the player passes the barrier. A bank chest is available just outside of the arena, and can be accessed at any time. Doing so will not pause the timer. This means that use of the chest should be judged wisely.

There are four tiers of combat available (Bronze, Silver, Gold, and Platinum), starting at 85 Slayer and increasing by 5 levels for each tier. Monsters killed during reward runs will give Slayer experience, and have a chance of dropping golden rocks for Slayer and the combat skills.

The Rush of Blood is part of the Iorwerth Clan. Morvran, the Slayer Master, watches over the player throughout the fight and can be seen sitting with what appears to be two hellhounds as pets or guardians. 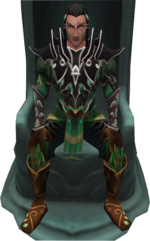 Other specific equipment will be needed depending on what mode is selected - see their relevant section below.

Hybrid armour is recommended instead of multiple sets of armour, as changing gear for each wave will take precious time.

Legacy Mode is not recommended as the damage output is too low compared to using abilities.

Familiars such as the steel titan will help clear waves faster. Dreadnips and steel titans cause tormented demons to swap between all 3 combat style protection prayers, allowing players to finish them at a much quicker rate.

The following setups are examples of what can be used for the lower and higher difficulties. Items may be changed according to your own gear and needs. Any hybrid gear will work well.

These are not as important as the above items, though these can be useful at times if you have them.

Monsters that are normally aggressive outside of this D&D will be aggressive here as well. Monsters for each wave are selected randomly from a set of possibilities listed below.

Some of the challenges will require some quests in order to access, due to the monsters faced in those waves.

Requires level 85 Slayer and completion of the Legacy of Seergaze quest.

Requires level 90 Slayer and completion of the Legacy of Seergaze quest.

Monsters fought in waves 1-5 are the same as in bronze challenge waves 1-10.

Monsters fought in waves 6-10 are the same as in bronze challenge waves 11 and beyond.

Requires level 95 Slayer, level 90 Dungeoneering, and completion of the Blood Runs Deep, The Branches of Darkmeyer, The Chosen Commander, The Elder Kiln, Fate of the Gods, The Firemaker's Curse, One of a Kind, Ritual of the Mahjarrat, The Void Stares Back, and The World Wakes quests.

Monsters fought in waves 1-5 are the same as in bronze challenge waves 11 and beyond.

Monsters fought in waves 6-10 are the same as in silver challenge waves 11 and beyond.

Requires level 99 slayer, 90 Dungeoneering, ability to kill Ice strykewyrms, and completion of the The Branches of Darkmeyer, The Chosen Commander, Fate of the Gods, The Firemaker's Curse, One of a Kind, Ritual of the Mahjarrat, The Void Stares Back, and The World Wakes quests.

Monsters fought are the same as in gold challenge waves 11 and beyond.

Players are able to access the reward chest after every play, whether it is a reward or practice run. The chest contains various items from the monsters that you've faced during the session. It should be noted that not all drops will make it into the chest, compared to fighting them in their standard locations.

Specific items, such as bones and ashes, never appear in the chest.

The following titles can be unlocked by completing 20 waves at the particular difficulty level:

It should be noted that players must clear wave 20 to receive the title; clearing wave 19 and reaching wave 20 will not grant a title.

Titles can be unlocked on either a reward run or trial run. Unlocking a title also unlocks all lower tier titles; for example, when unlocking the red Slayer Master title at Platinum difficulty, all titles that have not yet been acquired will also be unlocked.

Unlocking the red Slayer Master title is a requirement for the completionist cape.

Clearing wave 15 in gold or platinum is a requirement for the Tirannwn Elite Tasks.

Multiple factors, such as monster spawns, combat levels, equipment and connection issues come into play regarding finishing at least 20 waves. It may take several attempts before achieving a desired title.

On reward mode, Most Wanted cards (in Abyssal demons, Automatons, Glacors, and Tormented demons), Slayer VIP tickets and Ushabti are offered in the chest.

The drop rate of a most wanted card is #/20, with # being the amount of waves completed when the game ended. The player can only possess one Most Wanted card of that type at a time. If they have all of the cards in the bank, they will not receive any more until those cards are used/destroyed.

The first time you complete 20 waves in a run of Rush of Blood on any difficulty, Morvran will reward you with a 50,000 Slayer XP lamp once you speak with him. Claiming this lamp is also required for the completionist cape and the master quest cape.