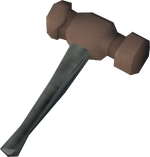 The Sacred clay hammer is obtained from transforming a proto-tool bought from Rewards Mystic with 20 Stealing Creation points. 24,450 bonus experience could be gained from it, which will be stored and used up while training Smithing or Construction.

Retrieved from "https://runescape.fandom.com/wiki/Sacred_clay_hammer?oldid=15732935"
Community content is available under CC-BY-SA unless otherwise noted.