RuneScape Wiki
Register
Don't have an account?
Sign In
Advertisement
in: Members' items, Items that are reclaimable on death, Untradeable items,
and 10 more
English

View source
watch 02:53
GTA: The Criminal Enterprises - The Loop
Do you like this video?
Play Sound
This article is about the reward item purchased with Stealing Creation points for use outside of the minigame. For the platebodies used inside the minigame, see Platebody (Stealing Creation).

The sacred clay top has transformed into a spiked, platemail body.

The sacred clay top has transformed into a spiked platemail body. 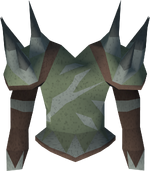 The sacred clay platebody is a piece of sacred clay armour obtained through the Stealing Creation minigame that requires 50 Defence to wear. The player can buy it from the Rewards mystic for 30 points as "morphic body armour". It can then be transformed into melee, ranged or magic equipment. Upon transforming it into a platebody, 24,450 bonus experience will be given in either Attack, Strength or Defence. It can be recharged by talking to the rewards mystic and paying 20 Stealing Creation points. The bonuses are exactly the same as those of a rune platebody, but the sacred clay platebody weighs 7.9 kilograms less. Alchemy has no effect on sacred clay, and if tried a message says 'alchemy spells have no effect on sacred clay'.

This platebody is often used by members who lack the required levels or simply cannot afford other, higher level armour such as the dragon platebody, and bandos chestplate. However, it offers bonus experience while in combat, so it is still very useful.