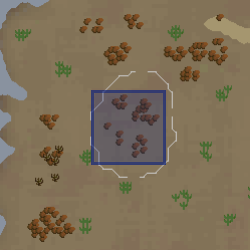 Sandstone rocks are a type of rock found at the Desert Quarry south of the Bandit Camp in the Kharidian Desert and within the Worker District in Menaphos. While in the Desert Quarry the Desert heat will continually reduce the player's life points while in the quarry. Players are encouraged to bring waterskins, an Enchanted water tiara, or a Tome of frost with them to mitigate the heat. Alternatively completing Crocodile Tears makes the player immune to the effects of desert heat completely.

Sandstone rocks respawn quickly; players can mine continuously at a group of only 3 to 4 rocks. When sandstone is mined, the player randomly receives one of the four sizes of sandstone blocks. If wearing Varrock armours, stones mined by the double mining chance will be the same size.

Sandstone is tradeable and sold on the Grand Exchange, although its only known use is to construct part of Lazim's statue during the Enakhra's Lament quest.

Players must have a Mining level of 35 or greater to mine sandstone, which yields the following experience on success based on the size of sandstone mined:

Retrieved from "https://runescape.fandom.com/wiki/Sandstone_rocks?oldid=24924451"
Community content is available under CC-BY-SA unless otherwise noted.