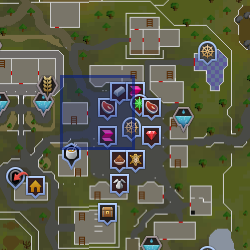 The Sandwich lady is a baker of sandwiches and other baked goods found in the Ardougne Marketplace. She runs the Sandwich Lady Bakery, which is the only source of various unique food, such as doughnuts. She is also a former random event, and plays a defendant role in the court case The Sandwich Lady v. The People.

As a random event, she appeared and teleported players to her own café.

She would offer you one of the following:

Shortly after the Sandwich lady's release, many players complained that they did not know what several of the items were and failed the event, causing them to be teleport to a far-off location. In response, Jagex added a link to a key showing all the items alongside their names. The key link is in the upper left corner of the sandwich tray box.

The Sandwich lady teleported the player to one of these locations if they chose the wrong item on her tray or did not respond to her at all:

Sandwich lady's food tray before she was removed as a random event.

The old sandwich woman tray. The Kebab got replaced by the Doughnut on 25 February 2009.

The updated key to the Sandwich lady random event.
Click an image to enlarge

Retrieved from "https://runescape.fandom.com/wiki/Sandwich_lady?oldid=24924342"
Community content is available under CC-BY-SA unless otherwise noted.