Start a Wiki
OS
For other uses, see Sandy (disambiguation).

The Hand in the Sand
Returning Clarence 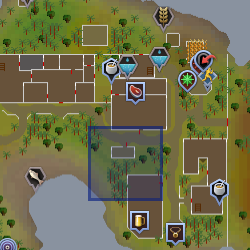 Sandy is the CEO of Sandy Sand Co. His office is located just north of the bar in Brimhaven. He owns all the sandboxes in RuneScape. He is featured in the Hand in the Sand quest, where it is revealed that he murdered a wizard and hid his dismembered corpse parts all over Gielinor. Players discover this by slipping truth serum into his drink. During and after the Back to my Roots quest, the player will obtain a hand part, then get additional body parts as drops from creatures in the Vine Maze during Returning Clarence.

He disappears after the Hand in the Sand quest. A later conversation with Bert seems to indicate that he was hanged for his crime, but during Returning Clarence, it is revealed he is awaiting trial at the Seers Village courthouse, after which the player finds more evidence to help convict him.

Retrieved from "https://runescape.fandom.com/wiki/Sandy?oldid=24924335"
Community content is available under CC-BY-SA unless otherwise noted.