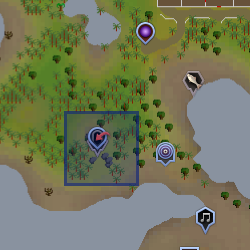 Saniboch is a tribesman responsible for guarding the entrance of Brimhaven Dungeon. Players without Karamja gloves 3/4 must pay him 875 coins to gain entrance.

Saniboch gives some general advice about the monsters inside the dungeon, but his skills in Agility and Woodcutting are too low to make much progress and he is unaware of the stronger beasts.

According to Herman's book, the Wise Old Man once ventured onto Karamja when he was young, where he advised one of the island's tribes to charge for entry to the dungeon. Saniboch mentions that he has an unnamed employer.

If asked about the tree that is growing on the door, Saniboch will say that his employer told him that is an uncommon tree called the Fyburglars tree.

Retrieved from "https://runescape.fandom.com/wiki/Saniboch?oldid=24923774"
Community content is available under CC-BY-SA unless otherwise noted.