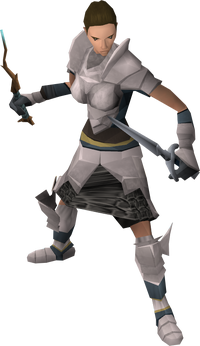 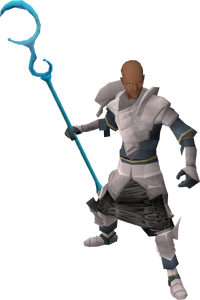 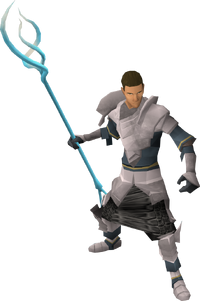 The Saradominist sage is a magic-based monster fighting on the side of Saradomin in the Battle of Lumbridge. They drop Divine tears. They can only be attacked by players who have sided with Zamorak. Before being attacked by a player, they have 10000 life points, but after being attacked, their life points and stats lower, with the extent they are lowered varying depending on the combat level of the one who attacked them, with a minimum of 128. They are capable of using abilities, however, and are dangerous in that regard. They can even use ultimate abilities such as Omnipower if the player takes too long to kill them.

They could use abilities including Impact, Combust, Wild Magic and Asphyxiate, and the ultimate abilities Omnipower and Metamorphosis. When using the latter they always morph into the fire form even though their last spell is a water spell.

In addition, this monster has a very rare chance to drop "the Powerful", "the Boundless" and "the Eternal" titles.

Click an image to enlarge
Retrieved from "https://runescape.fandom.com/wiki/Saradominist_sage?oldid=24920759"
Community content is available under CC-BY-SA unless otherwise noted.