He changes the shape of wood. 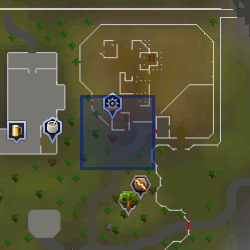 Bill the Sawmill operator can be found along the southern wall of the Varrock Lumber Yard, at the

icon on the minimap. He can turn four kinds of logs into planks (see sawmill), and also runs a Construction Supplies shop selling bolts of cloth, three kinds of nails, and saws. He will not accept noted logs.

Players can obtain planks by taking logs to the sawmill operator. Right-click on this NPC, and there will be a "Buy planks" option. Players can then choose to make regular planks from regular logs, oak planks from oak logs, teak planks from teak logs, or mahogany planks from mahogany logs, for a price.

Despite his name, the Sawmill operator is not involved in the Sawmill training operation at the nearby Sawmill.

Bill found the Lumber Yard about three years ago. Seeing it as a business venture that could become profitable, he bought the mill with three full time workers (one of which who would sue Bill at a later date) and many temporary workers at the yard and a contract with the Estate Agent. The Lumber Yard remains to be a profitable venture even with the advent of the Grand Exchange.

In 2013, Bill ceased to be the only plank maker in the game when the Plank Maker in Taverley was introduced.

The fastest way to make planks using the Sawmill involves the Lumber yard teleport. The teleport will take the player directly to the sawmill. A glory or duelling ring can then be used to bank.

The second fastest way to make planks using the Sawmill involves the Balloon transport system. Start at Castle Wars and use the balloon to travel to the location northeast of Varrock, which is close to the Sawmill. One willow log is required to make this journey. The balloon has a weight restriction (under 40 kg), so some players may only be able to carry 19 oak logs per round; however, wearing Weight-reducing equipment can allow the maximum of 27 oak logs to be brought. After making the planks, use a worn ring of duelling to teleport back to Castle Wars.

Another way to do this is to fly from Castle Wars to the lumberyard and chop down the oak logs there. Once the planks are made, teleport back to Castle Wars. This eliminates the weight restrictions for balloon travel, though it is a bit longer than taking logs from your bank. It is possible to make over 1500 planks per hour using this method.

Also note that you can use a beast of burden to carry extra logs to the sawmill. All items brought with you this way do not add to your character's weight, so you can fill it up for a good amount of extra planks per run. Should you use a Terrorbird then it is most efficient to have three open spaces in your inventory (four after the willow is used for the transport). This way you can maximise the speed at which you swap planks->logs. This can be achieved with a spotted cape and boots of lightness equipped.

The third fastest way to make planks using the Sawmill involves the Gnome Glider system. Use a Ring of Duelling to teleport to the Duel Arena, run southwest and take the glider to the Grand Tree. From there, take the Glider (run north into and its up at the top of the Grand tree) to Lemanto-Andra, which is south-east of the Digsite in Varrock. Run north from there, until you reach the first gate on your left (marked by a red line on your minimap) to the Sawmill and make the planks. Then use a Ring of duelling to teleport to Castle Wars to bank.

The fourth fastest way to make planks using the Sawmill involves teleporting to Varrock. Run from Varrock to the Sawmill and make planks, then teleport to Varrock using the spell or a tablet, and run to east Varrock bank to bank. It is possible to make 1000 planks per hour using this method.

Familiars are allowed on the Balloon method and can be used on the Varrock teleport method, but not on the Gnome Glider method.

A variation on these methods that would add woodcutting experience and increase profit per plank at the expense of time would involve cutting oak logs from the Oak Trees west of the Balloon.

Some higher level servants can take logs to the Sawmill to create planks. They take the Sawmill fee with them. One way to use this is to carry noted logs, then ask the Butler to unnote them, then ask for the unnoted logs to be taken to the Sawmill. The planks received can then be used to train construction immediately, or can be sent to the bank using the servant for profit.

Special teak logs and special mahogany logs can be brought to the Sawmill operator and either sold or exchanged for a completely free conversion of the logs in your inventory into planks. The free conversion requires two of the same type of special log, which can be supplied as bank notes:

If you have only one special total or one special of each type, the operator will only offer to buy your special logs. Also, Jagex has now added a mugger just outside of the sawmill to prevent any low level bots.

Retrieved from "https://runescape.fandom.com/wiki/Sawmill_operator?oldid=24562170"
Community content is available under CC-BY-SA unless otherwise noted.