A representative of the Anima Mundi. 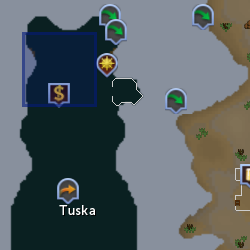 Scopulus was the representative of the Godless faction present in the third World Event, Tuska Comes. He remained on Tuska's corpse after she crashed in the sea near the Desert Bandit Camp with Kara-Meir and Garlandia joining him. During the World Event he allowed players to join the Godless faction and provided access to the reward store as well as the the reward store containing the Warpriest armours from previous World Events.

Retrieved from "https://runescape.fandom.com/wiki/Scopulus_(NPC)?oldid=24565333"
Community content is available under CC-BY-SA unless otherwise noted.