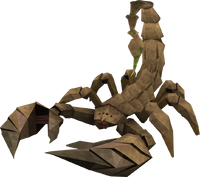 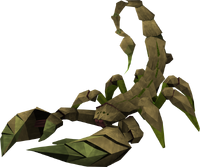 Scorpions are monsters that can be found at the Al Kharid Mine, north of Al Kharid, as well as Musa Point, the Dwarven Mine, and the Wilderness all as level 39. They attack primarily with ranged. The deadliest scorpions free players will face are the scorpions in the Stronghold of Security (level 25 and 26). They are also found caged in the Ardougne Zoo and are good training for low level mages and rangers, though care should be taken as they can range players right back. Level 25 scorpions also look slightly different in colour than the other scorpions.

Scorpions in the Al-Kharid Mines are popular with level 30s to level 70s for training.