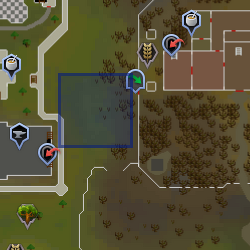 The Scout is one of the four scouts from The General's Shadow miniquest. The ring of visibility must be worn to see him, the ghostspeak amulet worn to talk to him, and the full set of Ghostly robes worn for him to recognise you as a messenger for General Khazard. He is located a little east of Falador, between the Falador east wall and the Draynor Manor west fence.