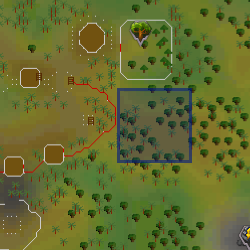 This Scout is one of the four scouts from The General's Shadow miniquest. The ring of visibility must be worn to see him, the Ghostspeak amulet worn to talk to him, and the Ghostly robes worn for him to recognise you as a messenger for General Khazard. The Scout can be found south-east of Tai Bwo Wannai Village, and north-west of the Karamja mining site.

His face on the chat screen appears to be grey, even though the other scout's faces have a little bit of colour.

Retrieved from "https://runescape.fandom.com/wiki/Scout_(Tai_Bwo_Wannai)?oldid=24563811"
Community content is available under CC-BY-SA unless otherwise noted.