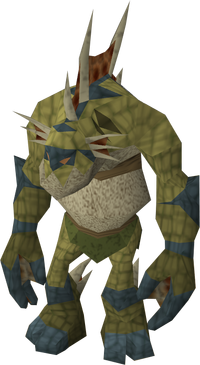 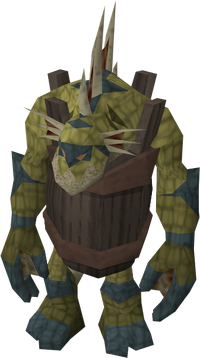 Sea trolls are encountered during the Swan Song quest. They first ambush the player and the Wise Old Man when entering the colony. You may also encounter a sea troll while fishing for monkfish during the quest.

There is also an army of sea trolls on Piscatoris that are effortlessly annihilated by the player's skeleton mages.

After completing the quest, sea trolls will no longer attack while fishing for monkfish.

During the quest My Arm's Big Adventure, if you have already completed Swan Song, My Arm will claim that sea trolls are "not proper trolls", which may explain why the Sea Troll Queen looks nothing like a sea troll, and why they do not count for troll slayer assignments.

Retrieved from "https://runescape.fandom.com/wiki/Sea_troll?oldid=19302671"
Community content is available under CC-BY-SA unless otherwise noted.