Seiryu (pronounced Sayr-you) also referred to as the Azure Serpent, Guardian Beast of the Eastern Lands, and the Spirit of Purest Water[1] is a legendary serpent worshipped by the Acolytes of Seiryu. It is one of the four guardians of the Wushanko Isles and is considered the purest one by the monks, being a spirit of water.

Hundreds of years ago, Seiryu was chained and slowly corrupted by black crystals infused with the power of Xau-Tak. Seiryu would later be freed by several adventurers exploring the temple. He telepathically communicated with them and expressed his gratitude for freeing him from the crystals, stating that he sensed another being in the same torment that he had suffered underneath Forinthry, which is now known today as the Wilderness.

Seiryu is featured in the Temple of Aminishi elite dungeon as the final encounter. In Story mode his health is reduced by 50%, although the threshold for knocking him down stays the same, and his damage output is reduced by 66%.

Shards of his power, in the form of spirit dragon charms, are dropped by Slayer monsters on Aminishi and can be used to access the Spirit Realm through The Well of Spirits.

Seiryu drops onyx dust, unless ancient scales or the chipped black stone crystal is dropped, which replaces the dust. 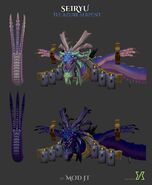