• A monstrous blob.
• A former citizen of Senntisten.
• A creepy little girl.
• A ghostly little boy.

Senecianus Aloysius Pamphilius is a Chthonian demon who lived in Senntisten during the Second Age. He is encountered during the Broken Home quest.

Senecianus was a soldier in one of the twelve legiones Zaros used to invade Gielinor. Like all Chthonian demons, he had a tremendous desire to devour others, which he repressed during and after the invasion.

Senecianus became an accountant working in the capital city of Senntisten. Many times he saw a human orphan in the alley behind his office, and over time became quite fond of the girl. He would leave small morsels of food for her in the evenings and watch her eat from his window. He named the girl Rowena, after a circus performer who shared her precise and jerky movements. Senecianus often told his clients of the girl's antics and mannerisms he observed, which amused them greatly.

One night, Senecianus finally decided to go into the alley and feed the girl himself. He expected the girl to be frightened, considering a chthonian demon's appearance, but she was not. Rowena hesitantly took the bread Senecianus had offered and they sat in silence. During this time, the hunger that Senecianus had suppressed since being discharged from the legion grew too large to control, and the demon instinctively devoured Rowena whole, absorbing her essence entirely. After this, Senecianus became insane and was committed to Senntisten's insane asylum.

During one of his rare lucid moods, the Mahjarrat Nabor interviewed Senecianus on the events that led to his institutionalisation. Senecianus calmly described his time as an accountant and his experiences with the girl, but when he began to describe what happened to Rowena, he again went insane and attempted to attack Nabor. Senecianus was restrained and returned to his cell, where he remained for the next several millennia.

After the fall of Zaros and the destruction of Senntisten, he was apparently forgotten in the asylum for thousands of years, until in the Fifth Age Ingram discovered a passageway into the abandoned asylum. Senecianus escaped the asylum - still insane after all these years. In his madness he transformed himself into the girl he killed and played around in the mansion, thinking he was Rowena.

During the quest Broken Home, Senecianus eats the ghost of another child — Lenian — and is eventually cured of insanity by the player, using a spell constructed from the research of Nabor, Ormod, and Ingram. After being cured, he assists in banishing Ormod's ghost from the mansion, either devouring him or helping him pass into the afterlife by taking Lenian's form. 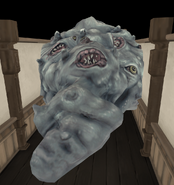 Concept art of Senecianus
Click an image to enlarge

Retrieved from "https://runescape.fandom.com/wiki/Senecianus?oldid=24565203"
Community content is available under CC-BY-SA unless otherwise noted.