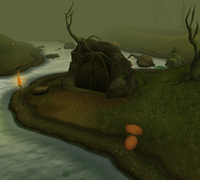 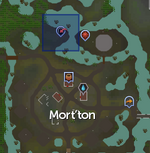 The Shade Catacombs are found under Mort'ton as part of the Shades of Mort'ton minigame and is a complex labyrinth. The entrance is to the north of Mort'ton (directly west of the Temple of Mort'ton) and is displayed on the overview map. To access it you need to have completed Shades of Mort'ton and have a Shade key of any type. In the catacombs, there are various shades and chests in which the rewards can be found. To get a bronze shade key, kill a Loar shade in Mort'ton, sanctify some Olive oil at the repaired temple to make Sacred oil, then use the sacred oil on any log, making a pyre logs. Use the pyre log on one of the four pyre slabs in one of the seven shade burning areas of Mort'ton, identified by grey diamonds on the minimap. Then use the shade remains on the pyre logs, then click on the pyre again to light it. You may need to burn more than one, as sometimes burning a shade produces coins instead of a key. The key or coins will appear on the stand at the end of the pyre.

When you cremate the shade remains, you may be rewarded with either coins or shade keys. These keys will be made from any one of 4 different metals, and 5 different colours. Each combination of metal and colour on a key will open a specific type of chest in the catacombs, and will disintegrate once you've unlocked it. The key can also be used to open all doors of the same or lower type of metal, improving from bronze to gold, and will not be used up when doing so.

There is a unique gold type of key that is used to open special chests.