The set consists of:

The style of this outfit is similar to that of the Shadow Drake pet. 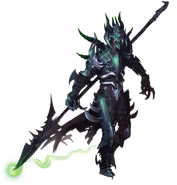 A player wielding the Fury's Remorse.

Retrieved from "https://runescape.fandom.com/wiki/Shadow_Dragoon_Outfit?oldid=22428944"
Community content is available under CC-BY-SA unless otherwise noted.