CSOS
Not to be confused with Shanty Claws.

He's in control of the Shantay Pass. 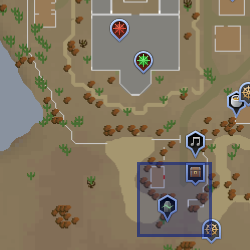 Shantay is a non-player character who runs the Shantay Pass. He owns the Shantay Pass Shop. Shantay also provides some information about desert survival, as the effects of the desert heat starts taking its toll south of Shantay Pass, which can be useful for new players going into the desert.

The player can escape by picking the lock of the cell, regardless of their Thieving level or their membership status, but it is easier at higher levels. It should be noted that picking the lock of the cell door, like the cell used in Monkey Madness, does not give the player Thieving experience upon success. The player is also able to teleport out if they have the runes, or can use the Home Teleport spell. There was a period of time this appeared to be impossible as Shantay only has an Examine option, but this has since been rectified through a hidden update.

Shantay can also drop a scrumpled paper which holds a recipe for ugthanki kebabs.