Sheep Herder is a short quest with just a few tasks involved. It can, however, take some time if the player has difficulty in herding the sheep, since they are not very cooperative.

The quest starts with the revelation that some sheep have been infected with plague. The target of the quest is to herd the sick sheep, kill them and dispose of their remains to prevent the plague from spreading to the town.

There have been rumours about plague-infected sheep escaping into East Ardougne.

If these rumours are true, then they must be found and disposed of, before the whole town is infected.

Time is of the essence!

To start, speak to Councillor Halgrive, who can be found in the church north of the zoo in East Ardougne. He says that a plague has spread across West Ardougne and their effort to contain it has mostly been successful. Unfortunately, four sheep that escaped from the farm near the city were found discoloured and on closer examination were found to be carrying the plague. The Councillor would like you to get rid of the sheep by poisoning them and incinerating their remains in a special area set up by Farmer Brumty.

He will give you some poisoned sheep feed, and then tell you to pick up a plague set - consisting of a plague jacket and a pair of plague trousers - for protection from Doctor Orbon, who can be found inside the church, just north of Councillor Halgrive. Doctor Orbon uses it to conduct mercy missions and will be glad to spare you his only suit in exchange for 100 coins. You will get the 100 coins back at the end of the quest. If you lose the poisoned sheep feed, Halgrive can give you more.

The plague set cannot be obtained after the quest, so if you want more, buy them before finishing the quest - the drop trick can come in handy.

Head to the enclosed area, which is situated by the river, north west of the Ardougne lodestone. Put on the suit and enter the fenced enclosure using the gate on the west side. Take the cattleprod lying on the ground near the incinerator in the enclosure.

Now you can begin to dispose of the sick-looking sheep. Wield the prod and then using it, direct the sheep into the pen around the incinerator. You do not need to open the gate as the sheep will jump over it, but you do need to lead them to the gate, as they will not jump over any other part of the fence.

You only need one of each colour and you can catch them in any order.

Do not wait for the sheep to stop before you prod it again. You can also prod the sheep, run to where you think it will end up - but a square off so you can prod it to change directions. You must be quick otherwise it will go back to its original position. Do not worry if the sheep get stuck behind rocks or trees, they will reset to their original positions in a few minutes. This includes the sheep you are herding. 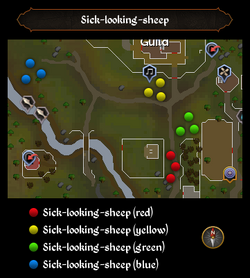 The locations of the sheep are as follows:

Once you have directed one sheep into the enclosure, feed it with the poisoned sheep feed you received earlier from Councillor Halgrive. The sheep will die and drop sheep bones, which you must burn in the nearby incinerator. Repeat this once for the other coloured sheep.

If you leave the sheep bones on the ground or take too long to collect them, you will have to re-herd the relevant sheep.

Speak to Halgrive again to finish the quest and claim your reward. 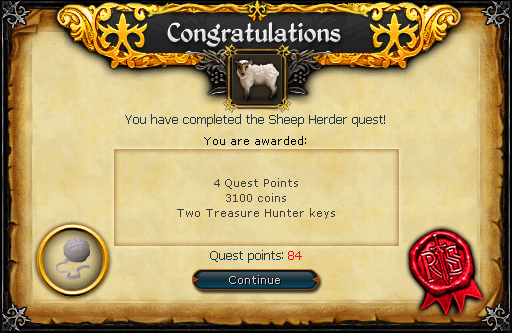 Completion of Sheep Herder is required for the following: