The left half of a dragon square shield.
Loading... 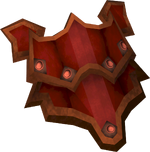 The shield left half is an item that can be joined with the right half to create the dragon square shield with level 60 Smithing. Joining the right half with the left half earns 75 Smithing experience. The other half of the shield is sold by Siegfried Erkle in the Legends' Guild Shop of Useful Items for 750,000 coins.

Players should note that it is cheaper to buy the full shield from the Grand Exchange than to buy the right half from the Legends' Guild after obtaining the left half.

Retrieved from "https://runescape.fandom.com/wiki/Shield_left_half?oldid=24534485"
Community content is available under CC-BY-SA unless otherwise noted.