Shield of Arrav is a quest where the shield of the famous Arrav of Avarrocka has been stolen by organised crime syndicates in Varrock.

Talk to Reldo, located in Varrock's library, in Varrock Palace, which can be found east of the Grand Exchange. Ask him for a quest and he will tell you there is probably a book on something in the library. You have to now search the bookcase with a blue book in the top shelf. When you've found it, read or skim through it. After you've read the book, speak with Reldo and ask him about the whereabouts of the Phoenix Gang, but he tells you to go to Baraek because he doesn't know.

The hideout is near the south-east corner of Varrock between the two bars/pubs. It is a bit south of the rune shop. Look for the dungeon icon (

) on your map to find the hideout. When you've found the red exclamation mark, you will see a ladder. Climb down it to enter the Phoenix Gang's hideout.

Inside the hideout, talk to Straven. If you ask to join, he will mention the Varrock Herald newspaper. This is a cover up. There should be an option to tell him that you know who he is, a member of the Phoenix Gang. If this option isn't there, go back to Baraek and ask him about the Phoenix gang again, as you missed getting all of the information about them.

Straven will want you to kill Jonny the beard. He is located in Varrock's Blue Moon Inn. This bar/restaurant is located near the south entrance of Varrock. Go inside the bar and find Johnny the Beard and kill him (he may need to respawn).

Jonny will drop a report which Straven needs. Grab the report and bring it back to Straven. Talk to Straven while having the report in your inventory, and he will make you a Phoenix Gang member, allowing you to enter their hideout.

Look around for a chest in the south-west corner of the hideout to find one half of the Shield of Arrav. Head back up to the surface, and head to the building with a ladder to the south of the entrance. The Weaponsmaster will let you in, and you may pick up two Phoenix crossbows for later.

Tell her you know about her gang and that you won't give your source. Ask her about what you should do to prove that you're trustworthy and she will give you a task to join her gang.

Katrine wants you to steal from the Phoenix Gang. She wants two of their crossbows. If you don't have them already, go back and talk to Straven to re-join the Phoenix gang, and take them from the weapons store.

When you have both of them, go back to Katrine, and she will make you a member of the Black Arm Gang. Go upstairs in the hideout and look for a cupboard, which contains half of the Shield of Arrav.

Combine both halves of the shield to obtain a restored shield, and give it to King Roald in Varrock Palace. He will be amazed that it has been returned after all this time, and say that it will once again be proudly displayed in Varrock Museum. 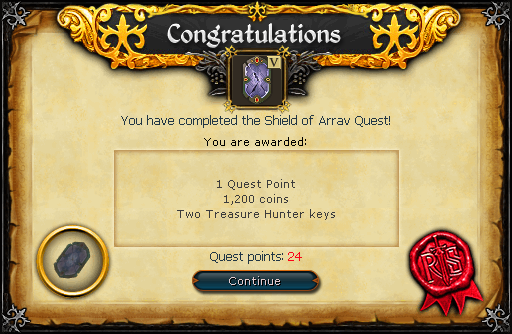 Completion of Shield of Arrav is required for the following:

Retrieved from "https://runescape.fandom.com/wiki/Shield_of_Arrav?oldid=18964940"
Community content is available under CC-BY-SA unless otherwise noted.