The Siege of Prifddinas, also known as the Baxtorian Campaign was a major conflict of the late Fourth Age. Occurring in the year 1935, it was primarily fought between the Iorwerth Clan and the other seven elven clans, led by the elven King Baxtorian Cadarn. The battle was won decisively by Lord Iorwerth, and eventually resulted in the complete disintegration of the eastern elven kingdom.

After the clans of the elves had begun to branch out across the mountain range of Arandar and into what is now known as Kandarin, an event known as the Break Out, in the early Fourth Age. The elven king Baxtorian and his forces settled at the foot of the Baxtorian Falls, which are now named after him, and established an elven-led kingdom. The Iorwerth stayed behind, entrusted with guarding the elven capital city of Prifddinas from within. This left the elven city virtually undefended and allowed Clan Iorwerth to attack and take capture of the city.

As the city fell, the Iorwerth clans denied access to the Tower of Voices from within the city for those not of their bloodline, blocked access to the Arandar Pass between Tirannwn and the eastern lands, and broke all contact with the eastern elven kingdom, an event known as the Great Divide. The six elders of the other clans who remained in the city were captured and imprisoned by the Iorwerth. Baxtorian sent five elven scouts through the Underground Pass to investigate; only one survived, and told Baxtorian of the Iorwerth treachery.

Baxtorian's forces and the forces of the other clans rushed back to Isafdar to liberate the city, commencing a five year campaign to fight back for return of the city's control to all eight elven clans, beginning in year 1930 of the Fourth Age. However, Baxtorian's forces were almost annihilated. Lord Iorwerth had summoned the power of the Dark Lord to strengthen him, easily defeating Baxtorian's elven forces. Baxtorian was unable to penetrate the well-fortified city walls and defeat Lord Iorwerth's army. Meanwhile Baxtorian's kingdom in the eastern lands fell into ruins, with his wife Queen Glarial captured by the enemy. Baxtorian could not continue fighting in this way, and the Baxtorian Campaign ended in year 1935 of the Fourth Age.

Knowing that he had one small window of opportunity left to take action, Baxtorian commanded a daring rescue mission to rescue the captured elven elders. The rescue mission was successful, and all six elders emerged safely from the city. To safeguard the city that they were unable to reclaim, the elven elders sang the song to revert the city to crystal seed form. Baxtorian then sent the other elven elders into hiding and, devastated by his loss, sealed himself away in the Baxtorian Falls. Young Arianwyn was chosen as his successor, to lead Clan Cadarn and the rebel elves.

Throughout the remainder of the Fourth Age, all of the Fifth Age, and the start of the Sixth Age, Prifddinas was closed to elves and humans alike, with Lord Iorwerth denying all entrance by the main crystal gate. Following the battle, the city reverted to its' former crystal seed state, with the land on which it stood left empty as a green open field. Iorwerth elves guarded the main gates, and forbade entry to those not of their clan. The elves of the other elven clans meanwhile retreated to Isafdar, having nowhere else to go. Arianwyn and Lady Ithell together founded the rebel elf village of Lletya, in the eastern part of the forest. Lady Ithell died shortly afterward, while Arianwyn became the primary guardian of the city as well as the leader of the rebel elves. The Isafdar Conflicts began, as the Iorwerth remained at war with the rebel elves throughout this time. It was not until the late Fifth Age and into the early Sixth Age that an adventurer stumbled upon and later got involved with the conflicts, partaking in the events that eventually led to the defeat of the Iorwerth elves and the restoration of Prifddinas, as a city once again ruled by all eight elven clans jointly, and now open to not only all elves of all clans but also to people of all races.

Prifddinas as it appeared while it was in seed form 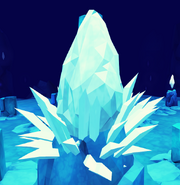 The crystal seed which the city reverted itself to, known as the Seal of Seren
Click an image to enlarge
Retrieved from "https://runescape.fandom.com/wiki/Siege_of_Prifddinas?oldid=16345018"
Community content is available under CC-BY-SA unless otherwise noted.