View source
watch 02:53
GTA: The Criminal Enterprises - The Loop
Do you like this video?
Play Sound
OS
This article is about advisor to Duke Horacio in Lumbridge. For Fremennik merchant, see Sigmund the Merchant.
Loading...
AdvisorH.A.M.In combat

Advisor to the Duke of Lumbridge. 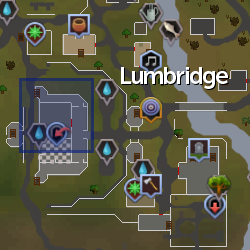 The Lost Tribe
Death to the Dorgeshuun
Another Slice of H.A.M.
The Chosen Commander

• Former adviser to the Duke of Lumbridge.
• He's plotting something bad!
• What is he plotting this time?
Please add a map!

Sigmund was a high-ranking member of H.A.M., the arch-nemesis of Zanik and thus one of the main antagonists of the Dorgeshuun quest series. He is also an advisor to Horacio, the Duke of Lumbridge, though he loses that title (but continues to still use it afterwards) at the end of The Lost Tribe.

The following takes place during The Lost Tribe.

During this quest, Sigmund sends the player to find silverware allegedly stolen by underground goblins. You talk to the people right outside the castle, then you report back to the Duke. During this quest it is discovered that Sigmund has taken the silverware and is a member of Humans Against Monsters, or H.A.M. His attempts at creating a war between Misthalin and the Dorgeshuun are thwarted, and he is dismissed for treason by Duke Horacio.

The following takes place during Death to the Dorgeshuun.

During the Death to the Dorgeshuun quest, a H.A.M. member reveals that Sigmund and Johanhus Ulsbrecht, head of H.A.M, are "planning something big". After eavesdropping on the H.A.M council, it is discovered that they are using a machine they bought from the dwarves of Keldagrim for unknown purposes. When the dead Dorgeshuun Zanik has been revived, she reveals that the H.A.M are going to use the machine to flood the Dorgeshuun capital, Dorgesh-Kaan.

After infiltrating the caves with the machine in it and slaying the H.A.M. helpers, the adventurer and Zanik battle Sigmund. After being defeated, he uses a Ring of Life, he escapes death and swears that they will meet again.

The following takes place during Another Slice of H.A.M..

Saradomin, protect me from melee!

In this quest, Sigmund and his men ambush goblins at the Goblin Village. After a brief struggle he captures Zanik, and ties her to the new rail line linking Keldagrim and Dorgesh-Kaan in the hopes of starting war between the two cities.

However his plans are foiled by an adventurer who defeats him by using an ancient mace, whom manages to get Zanik off the track just before the train arrives. And once again, he uses another ring of life to get away safely.

The following takes place during The Chosen Commander.

In The Chosen Commander, Sigmund has left the main H.A.M. base and has formed his own base in Kandarin due to some disagreements with Johanhus Ulsbrecht. While Johanhus wants to deal with the goblins indirectly, Sigmund tries to eliminate the goblins personally.

His plan first involved sending an undercover H.A.M. Agent to Dorgesh-Kaan to poison the food in order to wipe out the goblin youth, but this plan was thwarted by the adventurer. Upon finding out his agent was killed by Zanik, Sigmund decided to finish the Dorgeshuun off by invading the city with his H.A.M. army and destroy all the goblins there. To do this, Sigmund captures Grubfoot, the advisor to the Goblin generals, and tortures him to reveal Zanik's location and on how to access the city.

However, the adventurer discovers Sigmund's new base and breaks in while wearing a disguise. The adventurer manages to release Grubfoot, but triggers an alarm in the process and has to fight off the remaining H.A.M. agents.

As the adventurer and Grubfoot narrowly escape from the guards, Zanik (possessed by Bandos) arrives with a small group of goblins and attacks the base. Sigmund, despite having already failed with his latest scheme, engages them in a fight, looking forward to finally killing the adventurer. With the help of Zanik, the adventurer manages to defeat Sigmund.

Sigmund is stabbed to death by Zanik.

Sigmund tries escaping death using a Ring of Life as before, but Zanik cuts off his hand thus preventing him from using the ring. Sigmund begs for mercy and the player is given the choice as to whether tell Zanik to kill Sigmund, spare him, or say nothing at all. Regardless of what the player says, Zanik says that Sigmund showed her no mercy when they captured her in the H.A.M. base before stabbing him after Sigmund declares that he would rather be dead than live in a world overrun by goblins.

Due to the nature of the ring of life, Sigmund's hand later shows up in the courtyard of Lumbridge, where it is found by Duke Horacio.

Sigmund is fought in Death to the Dorgeshuun, Another Slice of H.A.M. (and the Dominion Tower) and The Chosen Commander. His stats and abilities vary depending on when he is fought.

Death to the Dorgeshuun

When fought in Death to the Dorgeshuun, he is accompanied by some fellow H.A.M. members. After his cronies are defeated, you and Zanik can take on Sigmund alone. Sigmund uses protection prayers to protect from attacks, but as you are accompanied by Zanik, out of spite for her, when she is attacking him, he will exclusively use the Protect from Missiles prayer, allowing you to attack him with magic or melee.

Another Slice of H.A.M.

When fought in Another Slice of H.A.M. and in the Dominion Tower, you will not have Zanik to help, as she has been tied to the train tracks by Sigmund. Instead, in order to disable his prayer, the player must reach 100% adrenaline and use the special attack of the Ancient mace. Although he has grown stronger since the first fight, he is still relatively easy to defeat.

During the final fight with him in The Chosen Commander, he uses the same tactics as in Death to the Dorgeshuun, and Zanik will once again accompany you, although this time, she will switch between her bone crossbow and bone dagger, causing him to switch his protection prayers appropriately, so the use of magic or multiple attack styles is advised.