Signature Heroes are characters who will accompany you within the game (particularly upon future quests[1]). They were first announced in the Developer Blog "Who are the Signature Heroes?" There are a total of six Signature Heroes (seven including the player). An update caused all the heroes to wander around the world, and gather at the Champions' Guild, Heroes' Guild or Legends' Guild (the Raptor is only in the Legends' Guild).

Ariane is a powerful magic user. Raised in Seers' Village, she retains the power of precognition. She has studied in almost all schools of magic and excels in all of them. She is curious about the ancient magic of Gielinor and is determined to find out all about it, despite her wizard teachers telling her not to. Ariane generally uses logic and reason to solve problems and may be described as naive at times.

Ozan is a bold and brave thief who tells exaggerated stories of "his" adventures, which no one usually believes. Born in Al Kharid and raised in the streets of Varrock, he is a skilled ranger and an agile person. Many say he is more obsessed with fame than doing what is right. Ozan usually follows his emotions, which quite often brings him into trouble.

Sir Owen (originally "Sir Ewain") is a strong melee warrior and is an elite member of the White Knights and Temple Knights. A devout Saradominist, he focuses on doing what's right, and scorns stealing and criminal activity. He believes Saradomin grants approval of his actions, and will do anything to achieve them for Saradomin. Much like Saradomin himself, he is benevolent, but will go very far to succeed in his goals, his faith being great and undoubted. He is currently in hiding after being tainted by evil during a failed attempt by Saradomin to resurrect him using Elora's Wand.

Xenia was a retired adventurer who was part of a previous generation of heroes, and has adventured with many other famous adventurers, such as Radimus Erkle, Harrallak, Shanomi, and the Wise Old Man. She acts as a mentor to the other heroes. She and Radimus founded the Heroes', Champions', and Legends' guilds. She has travelled to the Eastern Lands, but sworn to secrecy about it. She was killed by Ariane during the Heart of Stone quest. After her death, she aided the player, Death, and Icthlarin in defeating Nomad for good.

Linza is mainly interested in things related to Smithing or other handicrafts. She is always interested to learn of new techniques or materials for Smithing. She does not like machines with moving parts, preferring the simplicity of a balanced sword. A primary drive for her is creating 'the perfect sword' and things similar. After Kindred Spirits, she becomes Linza the Disgraced and joins the other seven Barrows wights at the Barrows.

The Raptor is a mysterious warrior who is very adept at combat, but not very talkative. He appears to be rather reluctant to cooperate with others and generally seems willing to kill anything that gets in his way.

He can be found in the quest Song from the Depths, slaying chaos dwarves at the Chaos Dwarf Battlefield, attacking brutal green dragons in the Ancient Cavern, or fighting lesser demons in the Karamja Volcano, as well as fighting on the Khazard Battlefield. He cares only about fighting and proving himself in combat regardless of what he is fighting, or why.

The player character is a skilled adventurer of all sorts and can be learned in any of the skill sets.[1] The player is appointed by a dying Guthix to be a World Guardian at the end of The World Wakes quest.

There were quests scheduled to come out mid-late 2010 featuring the Signature Heroes as ally characters. However, they were delayed or cancelled. Quests featuring each of the Heroes have since been released.

The loading screen that appears before the login screen used to have pictures of Ozan and of Ariane. Ozan was pictured jumping a long jump in the Temple of Light, and Ariane was pictured fighting an army of undead with magic.

Ariane, Ozan, and Owen made their first appearance with the release of the Fremennik Sagas on 1 June 2011, in the Fremennik saga Three's Company.

Ariane fighting an army of zombies with magic.

Ozan jumping a long jump over a "laser" in the Temple of Light.

Ozan as he appeared on the new login screen on 15th September. 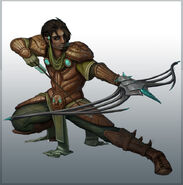 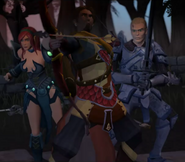 Ariane, Ozan and Sir Owen in the signature heroes advertisement.

Ozan, Xenia, Ariane and Owen at the Champions' Guild.

The heroes at the Heroes' Guild.

The signature heroes as they appeared on the login screen.

All the Signature Heroes gathered at the Legends' Guild.

The old models of Raptor, Ozan, Ariane, Sir Owen and Linza.
Click an image to enlarge

Retrieved from "https://runescape.fandom.com/wiki/Signature_Heroes?oldid=23294647"
Community content is available under CC-BY-SA unless otherwise noted.