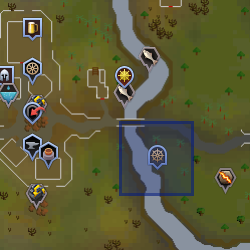 Sigurd is a barbarian who mans the canoe station east of the Gunnarsgrunn. When a player new to canoe making talks to him, he tells a story about when he invented the log canoe, the lowest level of canoe, requiring level 12 Woodcutting to make. With the 15 February 2011 update that made canoes available to free-to-play, it is also no longer necessary to have a hatchet to make a canoe - Sigurd will loan players his hatchet for free, which is automatically returned when the canoe is finished.

When spoken to, Sigurd will tell players of the best canoe they can make at their level, sometimes accompanied by a comment about an NPC at another canoe station.

Sigurd is referred to as "Sigurd the Great and Brainy" for having invented the log canoe, which occurred as Sigurd was having a party by the river with his cousins when they decided to play a game of Smack The Tree, a game where players take turns hitting a tree with the first person to uproot the tree being the winner. Sigurd uprooted a tree with a flying tackle and proceeded down the river holding onto the tree. When Sigurd woke up several hours later, he found himself several miles down the river. This was how the log canoe was invented, although Sigurd refined the design from the original log canoe, by cutting all the branches off to make the log canoe more comfortable.

Retrieved from "https://runescape.fandom.com/wiki/Sigurd?oldid=24562945"
Community content is available under CC-BY-SA unless otherwise noted.