Looks like he's seen the inside of a few tombs. 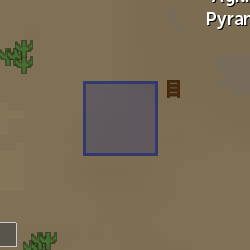 Simon Templeton is an unscrupulous archaeologist and treasure hunter infamous for his tomb raiding. He is located near the stairs up to the Agility Pyramid, situated between Nardah and Sophanem. A quick way to reach him is to teleport to Jaleustrophos using the pharaoh's sceptre. He used to have an assistant, Tarik, who is now trapped in Sophanem.[1]

Engaging in shady transactions with a mysterious client, Simon Templeton is wanted by the Sophanites, who regard him as an outright criminal.[2] He is known to have attempted robbery of valuable artefacts from Jalsavrah as well as assaulting its guardian mummy[3] and the Temple of the Lesser Gods, in particular the shrine of Het.[4] Possessing a keen eye for treasure, he went after the riches held by Jaleustrophos but apparently hurt his back while trying to descend to the pyramid, leaving him stranded where he currently is.

Always interested in valuable items, Simon will buy the gold pyramid retrieved from the top of the Agility Pyramid for 1000 coins, as well as any items obtained during the Pyramid Plunder minigame in Sophanem. Following Dealing with Scabaras, he accepts noted artefacts after having spoken with him and the Guardian Mummy of Jalsavrah. Unlocking this ability is a requirement for obtaining the master quest cape.

He used to sell historic documents to Osman regardless of their quality, but after he grew suspicious Osman ended their arrangement. This has caused the two men to have mutual distrust of one another.[5][6]

Simon used to be employed by the Varrock Museum, but left. He is quite contemptuous of the museum now, thinking their monetary mismanagement is rather awful.[7] They sent out several archaeologists without complete training or adequate resources then cut the funding. Simon believes the money went on extravagant projects like display cases or exploring an island.[8]

He may be related to Derygull Templeton, but this is unlikely.[9]

Retrieved from "https://runescape.fandom.com/wiki/Simon_Templeton?oldid=25197224"
Community content is available under CC-BY-SA unless otherwise noted.