View source
watch 02:53
GTA: The Criminal Enterprises - The Loop
Do you like this video?
Play Sound
RSCOS
Loading...
NormalHelmetedZombie

One of the king's knights. 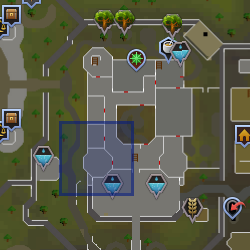 One of the king's knights.

One of the former king's knights.
Please add a map!

Sir Ehntor Prysin is one of King Roald's knights and the great-grandson of the hero Wally, who defeated Delrith in year 20 of the Fifth Age. He is located in the western part of Varrock castle, on the ground floor. He once attempted to pass the trials required to claim Silverlight, but failed, stating that he had to fight a nine-headed snake monster amongst other things.

Sir Prysin got his very own luxurious room in the palace as well a knighthood only because of his ancestor's feat. As a result, he is a very vain man, often bragging about his ancestry and even claiming other people's achievements for himself.[1] Captain Rovin and Reldo shows great contempt towards him, believing him to be an "ill-bred moron" and a braggart respectively.

Ehntor has at least two children, but his eldest son died as a result of a jousting match at the Midsummer Festival of 165 when his opponent's lance penetrated his leather gorget and pierced his throat. The wound could not be healed and he died a few days later under the attendance of Father Lawrence.