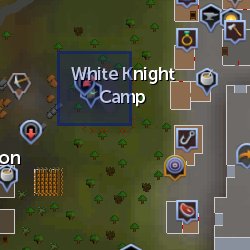 Sir Rebrum is a White Knight in command of the exploration and threat assessment of the Grotworm Lair near Rimmington. He set up a small camp outside the lair, where he has already lost several men.

When spoken to, he claims to hold himself in high regard and to have control of the situation. However, his men hold him in contempt. Sir Rinch, one of the men under his command who died, called him "a maniac[...]only interested in his own advancement".

Sir Rebrums voice
I am the famous Sir Rebrum; Hero of justice extraordinaire and destroyer of all things evil!

Retrieved from "https://runescape.fandom.com/wiki/Sir_Rebrum?oldid=24564724"
Community content is available under CC-BY-SA unless otherwise noted.