Sir Rinch is a NPC who appears to have already been dead for an unknown period of time. His lifeless body can be found directly after entering the Grotworm Lair. On his person, the player can read the deceased knight's notes. He goes on to explain that his commanding White Knight officer, Sir Rebrum uses dangerous methods to achieve his own advancement and refers to him as "ruthless". Rinch also talks about the worms living in the cave, he has a theory that there is treasure at the bottom of the caves which the worms digested. He also tells of skin samples he and his fellow White Knights found on defeated worm corpses; Rinch assumes that these samples come from a dead creature, perhaps referring to the Queen Black Dragon in some way. 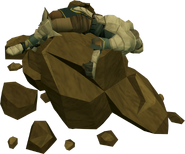 Retrieved from "https://runescape.fandom.com/wiki/Sir_Rinch?oldid=20646064"
Community content is available under CC-BY-SA unless otherwise noted.