One of the Knights of the Round Table. 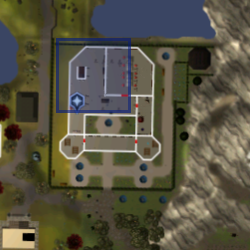 Sir Tristram is the one of King Arthur's knights and is found on the 1st2nd floor[UK] of Camelot castle. Players must help him break out of jail in the King's Ransom quest.

Sir Tristram is the third of the Knights of the Round Table to appear in the Knight Waves training ground activity. His attacks will temporarily lower the player's Strength, Ranged and Magic levels.

Retrieved from "https://runescape.fandom.com/wiki/Sir_Tristram?oldid=24562565"
Community content is available under CC-BY-SA unless otherwise noted.