She's only a novice. 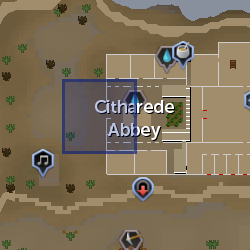 Sister Catherina is an novice nun at the Abbey of St. Elspeth Citharede. She was tasked by Abbess Benita to wait outside the abbey for an adventurer in order to gain their help investigating a murder.[1] Afterwards, she moved to the oratory.

She applied to join the abbey on the same day as Isabella and they were both interviewed by Sister Anna, though Sister Anna's intensity caused Isabella to reconsider.[2] Despite her dedication to the order, Sister Catherina found it hard to give up some of her wants and habits considered undesirable by the order.[3][4][5] She was particularly fascinated by a troubadour who had set up camp outside the abbey. She often assisted Sister Debora with maintaining the clock tower.[6]

Following the murder of Sister Elena, she went to the troubadour's camp and started dancing. Abbess Benita, concerned for her safety, ordered the adventurer to bring the novice inside. Sister Catherina was reluctant to come, having developed doubts as to whether the order was the right choice for her.[7] However, before she could make it inside, the Killer slew her for dancing, considering her unworthy of being a member of the abbey.[8]

Retrieved from "https://runescape.fandom.com/wiki/Sister_Catherina?oldid=24564587"
Community content is available under CC-BY-SA unless otherwise noted.