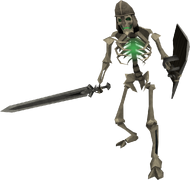 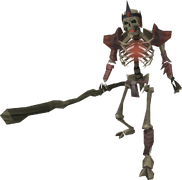 Skeletons can be found in Tarn's Lair, a dungeon full of undead found in Morytania. Like most undead, they are weak to the Salve amulet and Salve amulet (e), the latter of which is obtained in the dungeon they inhabit. Most of them attack with Melee and can be found wandering around the dungeon, with the level 77 variety being extremely common, the level 79 varieties being somewhat uncommon and the level 45, level 70 and level 71 skeletons only consisting of one or two members. There are also some level 72 skeletons found inside the Abandoned Mine, just outside the entrance to the lair.

The level 79 skeletons found above the room directly preceding Tarn's abode are unlike the others in that they attack with magic and wear robes. These are capable of casting a spell that lowers your stats, saying "Let me infect your body with rot" when they do so.

If you wish to train on them, the banker Odovacar can be found close to the entrance to the dungeon, allowing easy banking. A respawn of Toad batta can also be found in the dungeon, beneath a trapdoor.

The level 77 variety can also be found with some Zombies in some of the south-western caves of the Chaos Tunnels.